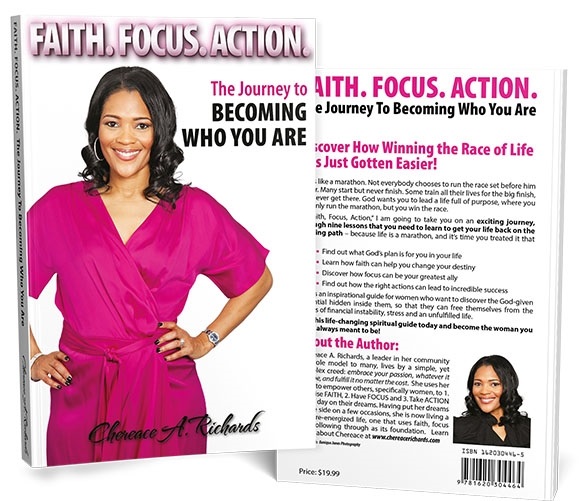 Chereace Richards is a wife, mom, entrepreneur, founder of the 21 st Century Woman community, Network Marketing Million Dollar Earner and author of Faith. Focus. Action: The Journey to Becoming Who You Are (2013).

In 2006, Chereace was introduced to the Profession of Network Marketing. Having no prior Network Marketing experience, in less than two years, she was able to walk away from her GS14 Federal Government Information Technology position to build her business full-time. As a licensed financial professional, she focuses on income protection, debt elimination, tax-free retirement, and generational wealth creation. Her goal is educate and empower individuals and families on how money works so they can make solid financial decisions.

Chereace holds a Bachelor’s of Science degree in Computer Science from Bowie State University and a Master’s of Information Technology from American University. Chereace has been featured in numerous magazines and books, including Washington Post Magazine, Success from Home Magazine, Fit Figures Magazine, Hustlemama Magazine, HERLIFE Magazine as the January Covergirl, and the non-fiction compilation Wealthy Direct Sales Women: Their Leadership, Strategy, Money, &amp; Love of the Game. She has received numerous official citations, awards and recognition including the Woman of Distinction in Leadership.